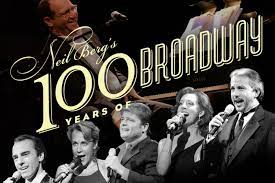 Neil Berg’s widely acclaimed 100 Years of Broadway, a musical revue of Broadway’s most celebrated shows features a dazzling cast of three Broadway stars accompanied by an all-star New York trio. According to San Francisco’s KABC radio theater critic, Jerry Friedman, “This revue features some of the best songs from the best Broadway shows, all sung by some of the most talented performers working today singing many of the hit songs that they have sung on Broadway.” 100 Years of Broadway recreates the greatest moments from the finest shows of the century featuring the actual stars of shows such as The Phantom of the Opera, Les Miserables, CATS, Jesus Christ Superstar, and Jekyll & Hyde. These amazing performers light up the stage with songs from the hit shows in which they starred. Neil Berg presents brilliantly revived arrangements of Broadway classics as well as thrilling numbers from Broadway’s newest hit shows.