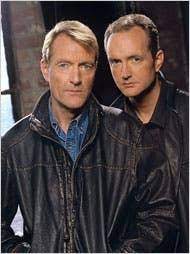 The final installment in the Authors in Conversation series features Lee Child and Andrew Grant. Lee Child is #1 New York Times bestsellling author of the Jack Reacher thrillers. A native of England and a former television director, Child lives in New York City.

Andrew Grant's works in the suspense and thriller genre include the critically-acclaimed Cooper Devereaux, David Trevellyan, and Paul McGrath series, and now the Jack Reacher series, following the release of "The Sentinel."

When Child decided it was time to find someone to take over the beloved Reacher series, he picked the "best tough-guy writer he had read in years," his brother, Andrew Grant. The brothers will be discussing their books and the transition of the Jack Reacher series.

The video below will be available starting Aug 24. and remain up through Sept 3.