History Center Lecture: The Jersey Shore - The Past, Present, and Future of a National Treasure 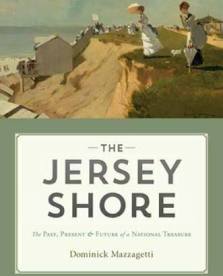 Join us at the Library for a History Center Lecture from the author of The Jersey Shore, Dominick Mazzagetti. His book provides a modern re-telling of the history, culture, and landscapes of this famous region, from the 1600s to the present. The Shore, from Sandy Hook to Cape May, became a national resort in the late 1800s and contributes enormously to New Jersey’s economy today. The devastation of Hurricane Sandy in 2012 underscored the area’s central place in the state’s identity and the rebuilding efforts after the storm restored its economic health.
Divided into chronological and thematic sections, this book will attract general readers interested in the history of the Shore: how it appeared to early European explorers; how the earliest settlers came to the beaches for the whaling trade; the first attractions for tourists in the nineteenth century; and how the coming of railroads, and ultimately automobiles, transformed the Shore into a major vacation destination over a century later.